Friends of Freycinet ‘The Mayhem’

What better way to mark National Volunteer Week than to have a week long working bee at the same time?  Was that planned?  You bet!

On arrival at the Freycinet Visitors and Field Centre we were met by a large welcoming sign and two scrumptious cakes made by PWS staff members Fiona and Natasha, (known to their friends as Fee and Tash)

All ten of us were accommodated in PWS staff housing with all of us in our own rooms.  Some even had their own ensuite.

Does that sound good so far?

Fee had prepared her usual spreadsheet of jobs to be done, staff to be deployed, and three vehicles booked so we were well organized.

A high priority job involved replacing pine posts and installing new Baco wire at Middle Bank, Moulting Lagoon.  We did not count them but close to 100 new posts were put in and some others straightened.  This was a huge job and took a large team 2.5 days.  Some of those holes were difficult!

Another team went to south Friendly Beaches and pulled over 1300 caper spurge plants and checked the area for sea spurge and other weeds.

We also did our usual oiling of the Cape Tourville boardwalk. 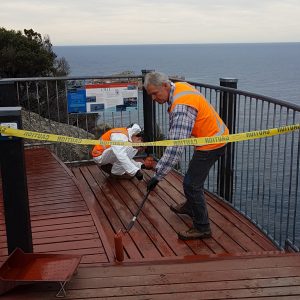 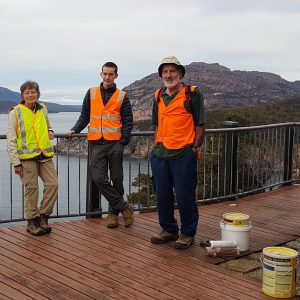 The Douglas Apsley National Park did not miss out on our ministrations as we removed Spanish Heath from the edges of the northern access road. Regrettably an infestation was found in from the road and this will be done later.

The stage and steps at the Outdoor Theatre complex were painted as was a problematic wall in the ablutions block in the PWS workshop.  The floor there was also given a coat of paving paint. 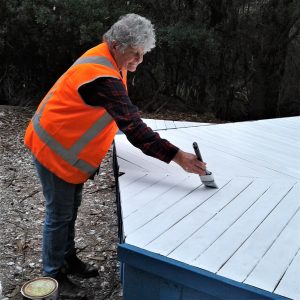 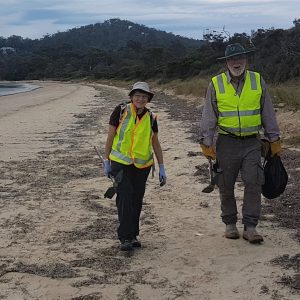 We removed thistles and some rubbish from Richardson’s Beach, the campgrounds, and along the road from Freycinet Lodge back to the Visitors Centre.  We also removed Sweet Pittosporum from around about the place.

We finished up with a Friday lunchtime barbie at the ‘Good Intent’ glamping site.

Oh! and did I mention that we all went to the pub for a meal on Wednesday?  We were the noisiest mob there of course.

There is still a gallimaufry of jobs on that spreadsheet to do and new ones are being added all the time (thanks Fee).  We will form another team of enthusiastic and hardworking team of Foffers to tackle them in August.

I am looking forward to that.