A Monday in March saw Friends of Freycinet (FOF) gathering at Freycinet National Park for the March Muster working bee.  We had a plan, we had the participants, and we kinda had the weather. Ranger Fee’s plan for the week included some of the following gems:  the Hunt for the Spooky Bridal Creeper and other Weedy Tales; Oiling Me Deck Timbers; the Peninsula Pirates, plus other adventures.

After some sustenance, a safety briefing and site induction we were off on our hunt for bridal creeper which took us behind the campground and the houses along Freycinet Drive. A successful hunt was concluded that afternoon with the final moments spent in the workshop preparing for the day ahead.

We awoke to a fine morning on Tuesday so set off as planned.  One team to Friendly Beaches with Nathan to stain the seat and rails at the lookout and the platform near the campground, and the other team to Cape Tourville with Nick to stain the boardwalk there.  We managed to at least get the staining done before it started drizzling in the afternoon.  This called for a retreat to the workshop and the rest of the afternoon was spent painting the bathroom, sweeping, vacuuming, oiling tools and tidying shelves.

Wednesday the group headed to the Seymour Conservation Area to tackle some gorse as well as removing some lupin insurgents. We bailed from there at lunchtime and headed back to Bicheno and Whalers Lookout Reserve where we spent the afternoon removing sweet pittosporum, bluebell creeper and boneseed.

Thursday shone bright so with the Parks boat in the water, most headed to the Peninsula for remedial work on some tracks.  The Peninsula group split into two under the guidance of Nathan and Nick; one group heading to the foothills of Mt Graham and the other to the Hazards-Cooks Beach track.  Bronwyn who stayed ashore continued with the painting of the bathroom in the workshop.

Friday, being a half day, was work around the Visitors Centre.  The deck at Richardson’s Beach was oiled, some maintenance completed on the Whale Seat, vegetation trimmed, and a final coat of paint on the bathroom floor, even the truck got a wash.  Overall, a busy week.

Thanks to Fee, Nick and Nathan and to all FOF participants. 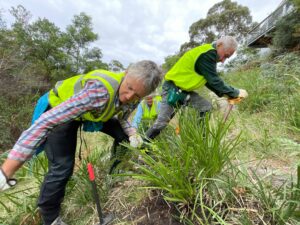 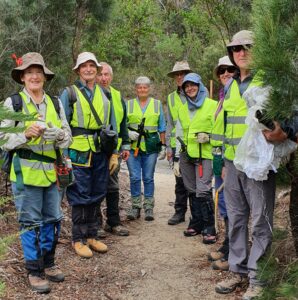