Maria Island lies off the east coast of Tasmania. It has a wide range of habitats, with a rich variety of animals and birds and World Heritage listed convict buildings. For many years volunteers worked on various projects on the island, including renovation work on heritage buildings.

Background
Prior to the establishment of our Wildcare group a dedicated band of volunteers worked for many years on various projects around the island including renovation work on heritage buildings. Sporadic attempts were made to control areas of Broom but this had only a short-term effect.
In 2005 the Head Ranger established the overall extent of the Broom (2sq km – Skipping Ridge and Bernacchis Valley) and Spanish Heath (7 hectares – Haunted Bay) and subsequently initiated a systematic eradication programme based on a mapping system and centred on volunteer work. 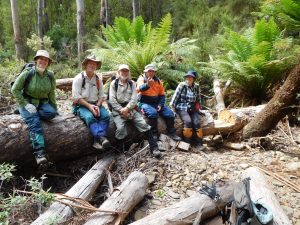 This led in 2007 to the formal establishment of our group and this enabled grant applications to employ weed contractors to spray readily accessible infestations with the associated necessity for detailed mapping. Mapping consequently took up much of our time in the next 2 years and in the process organisers had to acquire survey, GPS, computer and digital mapping skills; we were left to our own devices to further develop specific systems of weed control, data collection and recording. Challenging but rewarding! And there was always the intimidation of facing an extensive hillside choked with Broom and the sheer physical effort involved in clearing it; some of our members reveled in it all!
“The most extensive threatening weed problems in otherwise intact native vegetation occur on Maria Island. The potential impact of the spread of Broom* and Erica** is frightening and these infestations are rated as having the most serious long term impact on the nature conservation values of national parks within the district.” (South East District Weed Management Plan 2000-2003).

“Practical and effective options for control have not been found.” (Maria Island National Park Management Plan 1998).
The first grant included funding for the control of a remote, isolated patch of Spanish Heath in the south of the island. After assessment by a weed contractor this was deemed to be impractical for professional work. Volunteers were transported by boat to camp at Haunted Bay and, over two extended expeditions, effectively cleared the site. Outstanding support from Parks was instrumental in the success of this venture.
During 2017 we continued our weed monitoring on the island with a committed band of regulars supplemented by a welcome seasoning of newcomers. Of particular note was our first ever ‘local’ participant from Triabunna.

Montpellier Broom
We have been working on the broom for 12 years. 3 years ago primary control was completed on the 290 known sites in Bernacchis valley and on Skipping Ridge. Using a dated ‘colour coding’ mapping system we can systematically work through the broom infestations to avoid plants maturing and seeding. The current level of working bees (4 days x 4 per year) appears adequate for this follow up; ensuring patches are done within 2 to 3 years. By strategic use of our volunteers and the help of Parks we are also able to deal with a number of other minor weed infestations within this timeframe.
Because of the variability of broom growth we are flexible in our approach. Bernacchis Creek needs monitoring twice annually because the broom can grow to 2 meters in 18 months whereas on dryer exposed slopes the seedlings can be cleared every 2 years. We are now beginning to find sites which are weed free.
The biological control Psyllid introduced to the inaccessible broom patches on the fossil cliffs in 2014 has prevented any flowering, with many dead plants and any regrowth dying. 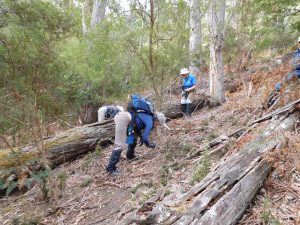 Sea Spurge
Annual late summer and spring checks on Riedle Beach found just a few small plants scattered along the beach.
Unfortunately a new infestation has been found around Bloodstone Point. A single plant found in 2013 should have been a warning (there must have been more). In 2017 over 5 trips by Parks and other groups cleared the area around Bloodstone Pt: however in November a thorough search found plants spread from the Point and north along the length of Bloodstone Beach. One plant had seeded and some were flowering. This will need monitoring biannually.

African Daisies
To add variety to our Sea Spurge work at Bloodstone Pt., time and energy permitting, we have begun to work on the scattered infestation of African daisies along the foreshore. A few plants per trip should eliminate it in a few years.

Spanish Heath
Annual monitoring of the 2 hectares at the Robey’s Creek site is showing a continuing reduction in regrowth since 2009. In Nov. 2017 four of us spent 3 hours searching, clearing seedlings and removing 17 flowering plants. The persistence of the regrowth will require annual checks compared with the 2 year monitoring at the Haunted Bay site.

Wild Mignonette
One area of focus has been an isolated, dense and spreading infestation near the French’s Farm shearing shed. Because the site is on route to other projects we have been able to regularly monitor here. After 23 clearings since 2007, our last count was 1 small+ one tall. This looks good but we are unsure of the Mignonette’s seed longevity.

Return Point pasture weeds.
The removal of Mignonette, Horehound, Thistles and Mullein from the Point will resume in 2018.
David Reynolds was successful in obtaining a NRM grant to set up a wash down station at Triabunna.

Thank you
We appreciate funding from Wildcare to cover ferry fares to the island and thank Parks for transport to the distant weed sites and for general assistance.