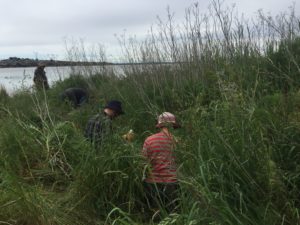 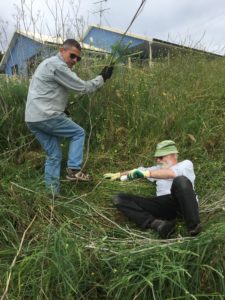 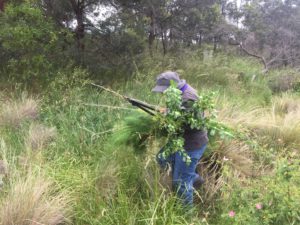 Our intrepid team tackled another thicket of Common Fennel that had taken a hold of a vulnerable piece of foreshore at Penna.  The Fennel were growing among a forest of tall introduced grasses, and docks. 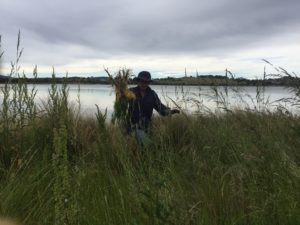 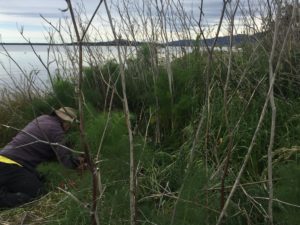 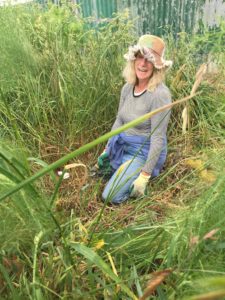 The foreshore has been vulnerable because of past land practices, which have seen the removal of our coastal trees, such as Black Wattles (Acacia mearnsii), Common Boobialla (Myoporum insulare), Prickly Beauty (Bursaria spinosa), Casuarinas ( Allocasuarina verticlliata and A. littoralis) and White Gums (Eucalyptus viminalis). This is part of the bigger project of restoring the Penna side of Pitt Water to a natural condition, being part of the greater Pitt Water world recognised RAMSAR wetlands for local and migratory birds. 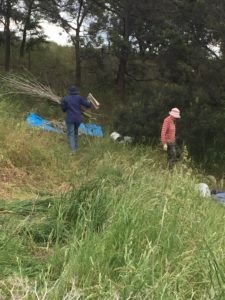 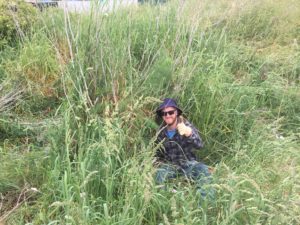 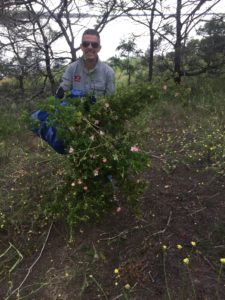 The Sorell Council have already put in two beautiful new bridges and graveled some of the pathway to prevent further erosion by humans and canines regularly walking in this area.

We have also held 4 working bees to remove the invasive weeds. This will allow the native shrubs, herbs and grasses to return and re-establish native grassy woodland.

To our delight we found 2 small saplings of Bursaria to protect and encourage survival. With some help the native species, such as Rhagodia candolleana (salt bush), Kangaroo grasses, Juncus and Carex species (Reeds and sedges) can return and reclaim the ground cover.

The Sorell Council have helped by taking away our weed piles promptly to reduce the risk of fire hazards accumulating. We had a huge long pile this time, reaching 10 m x 1m x 1m at least! Double the length of our team line up. 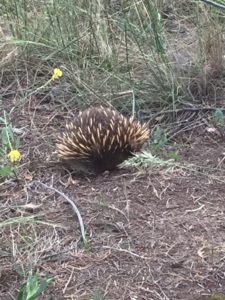 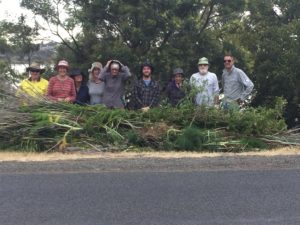 Photos: 1. Scott, Shirley, Malcolm and Pam in among it all; 2. Falling over was easy in this tangle; 3. Shirley carrying Fennel and Boneseed; 4. Mona doing the same; 5. Scott getting into the base of things; 6. Collette laughing it off;  7.  Mona and Pam re-enacting a moment from “Picnic at Hanging Rock”; 8. Malcolm being swallowed by the thicket; 9. David with a bouquet of Briar Roses;  9. Echidna local came to visit and 10. Our trusty team, Scott, Pam, Mona, Collette, Viv, Malcolm, Shirley, Bob and David (photo by Georgie)