Birthday Cake for 10 years of Wildcare Volunteering at Melaleuca

Friends of Melaleuca’s inaugural meeting was held in May 2009, so our May meeting this year was a good enough excuse for a birthday cake after dinner. And what a cake it was! Made especially for the occasion by the Marmion family, the cake was delicious, and wonderfully iced and decorated with an “aerial view” of Melaleuca, including rivers, buildings, airstrip and plane, boat (Rallinga) and even a wombat!

It is great to have some younger members in our branch, and Oliver was the one to make the first ceremonial cut of the cake. Most of the decorations were edible, except for some of Oliver’s lego which he carefully removed as the cake was sliced, and somehow it fed the large gathering, in fact – the biggest meeting we have ever had. 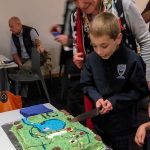 So with replete stomachs we moved onto the meeting and a presentation of images showing FoM’s achievements over the decade. It is heartening to review past years sometimes to see how far we have come. We jumped in boots first in 2009, with a heritage conservation plan produced by Ian Terry and David Parham, and a film evening to raise funds. Organising this was a lot of work, but rewarding and well patronised, so we ran another in 2012. Meanwhile, work on the ground got underway with the first of our annual working bees in March 2010. Our second working bee, gallantly led by Craig Saunders, tackled the big job of re-roofing the Charles King Memorial hut, built in 1960. The old iron by this time looked like a cheese-grater!

Work over the years has encompassed much maintenance work on heritage buildings, structures and rusty machinery from the tin-mining era; painting roofs; draining and weeding including a spring-time Rhododendron ponticum cull. We have also taken on maintenance of Win and Clyde Clayton’s former home at nearby Claytons Corner.

Our biggest single project has been the creation of the Deny King Heritage Museum. Support from the Tasmanian government through Arts Tasmania’s Small Museums and Collections Scheme, the Tasmanian Community Fund and also some businesses helped to achieve a professional result.  Our 10th Anniversary meeting also acknowledged the wonderful partnership that exists between our Wildcare Branch and the Parks & Wildlife Service.

But the best thing is the Wildcare volunteers – wonderful people who generously give their time and extensive expertise to make it all happen. Thanks also to the Wildcare “mother ship”, the team working behind the computers in support of us all. Thank you.