Another Milestone for Friends of Tasman Island

Another Milestone for Friends of Tasman Island

In 2005, the sad spectacle of the Tasman Island light station keepers’ quarters – abandoned since 1977 – was the catalyst for the formation of the Wildcare group Friends of Tasman Island.  Fast forward 14 years and the group has now celebrated its 30th working bee on the island.

However, this time, Tasman seemed to be playing hard to get!   Gusty winds and intermittent showers postponed the morning departure.  Finally, in early afternoon, five volunteers took off for the short 10 minute helicopter flight.  But it seemed that they’d hardly left when they were back again – the flight aborted due to the continuing turbulent conditions.  An “exciting” flight, they said!

Reassembling early the next morning, the weather gods were at last in their favour.  By 10am, Tasman Island had welcomed eight volunteers (two had had to drop out at the last minute) as well as three 600+kg sling-loads of materials and equipment, each load dropped precisely where needed to minimise handling.  PWS Heritage Officer, Peter Rigozzi had also hitched a ride to see how work was progressing and Rosemary Bailey was on a quick visit, gathering data for a proposed smartphone App of the island’s historic features.

Having arrived, there was a sense of urgency.  There were only 9 days left in which to complete the planned works – restoration of the sunroom and verandah of Light Keepers’ Quarters No 3;  the replacement of rotten floor boards and rusted lintels at Quarters No 2 and a weeding programme, commenced by Bob and Penny Tyson in 2009, this time planning to concentrate on infestations of Californian thistle.

After a quick cuppa and a slice of Rachel’s Banana bread, it was full steam ahead.  Rachel and Elaine concentrated on unpacking and restocking the pantry while FoTI’s heritage builder, Dave, and his team started the first stage of work on the sunroom.  However, the lull in the weather didn’t last long.  Early next morning the sound of the wind roaring around Quarters No 3 was suddenly interrupted by the staccato sound of a hammer drill – but it was only 5.30am!  With his off-sider Mark, Dave was hoping to stabilise the framework of the sunroom before the forecast increase in wind strength.

Restoration work involved an almost complete rebuild of the sunroom, first removing flooring and parts of the framework.  The footings were also a bit dodgy in places and Ryan proved an expert concrete mixer for the new footings. Rotten bedding plates were replaced and new floor joists were then fitted while Ian set up a paint station to prime the underside of the floor boards.  However, sea mist blowing in from the north east obscured Cape Pillar and made for slow drying.

In the meantime, the weeding team – Jo and Jane – did a recce for blackberries, but luckily found no new infestations.  Jane then commandeered the ride-on mower (purchased by PWS last year) and soon turned the grass into lawn.  There was no need to rake either – the wind just blew it away!   Elaine put the 40 year old “heritage” Electrolux vacuum cleaner donated by Ian to good use, getting Q3 ready for the multitudes that were due to arrive on the Rotary Club of Tasman Peninsula’s visit on Saturday. 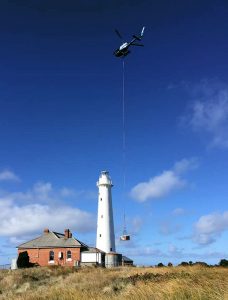 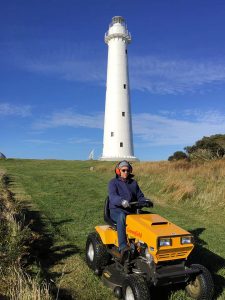 Tasman Island’s fickle weather conditions featured prominently in each day’s Facebook blog.   By Day 3 the wind had returned but then subsided again by Day 4!  Work on the sunroom continued.  With the roof now removed, new stainless steel anchor bolts were installed to hold the roof framing tight to the brickwork.  Then, flooring and wall cladding were added.

After the wind had blown itself out there was an eerie silence.  No sound could be heard – no birds, insects or rumbling surf breaking on the cliffs below.  What a contrast to the howling winds of previous days.  In the interval of calm weather, another a dose of spray was applied to the Californian thistles, reinforcing previous sprayings of over 2500 plants.  No trace was found of previous infestations of blackberry, gladioli, montbretia or oxalis but a large Hebe plant, discovered outside Quarters No 1, was carefully removed and composted.  There were also a few brassicas, wild radish and milk thistles to contend with.

The decrease in the wind strength meant that the planned change-over of volunteers at the mid-point of the working bee went well.  Three of the team were returning home, while five more volunteers arrived to continue the work.

The adage “Red sky in the morning, the sailor’s warning” at sunrise on Day 7 brought more than a hint of a return to windy conditions.  Work focussed on getting the sunroom roof completed with all flashings and fixings, and the external cladding finished.

New arrival, David (who had recently spent 6 months on Maatsuyker Island) together with Jane took advantage of the light winds to finish thistle spraying, while Greg and Ian cut up and stacked an old water tank from behind Quarters No 1.  Bricklayer, Mike, worked his magic, removing rusted steel lintels from above the windows at Quarters No 2.

“The Wind is back” proclaimed the blog on Day 8.  The forecast weather change meant that this could be the last day for outside work.  Photographers gathered to take shots of the windy sky at sunrise.  Then, after breakfast, it was back onto the sunroom for Dave, Ryan and Stefan, while Tim and Ian painted the external cladding.  Measurements were also taken in the back verandah for a future rebuild. 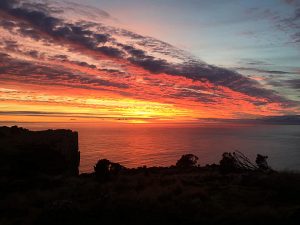 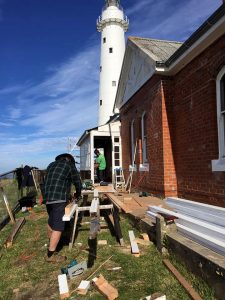 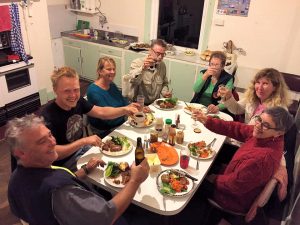 The wind was howling – “all four seasons in one day” – and it didn’t look like it would ease any time soon.  Due to the forecast, plans for Rotary’s visit the next day had been cancelled and FoTI volunteers found that, like the story in Joan Wise’s book, they were “Trapped on Tasman”.  Outside work had to be postponed and Ryan and Stefan decided to have a bread baking competition.  Judging by the comments – the results were a great success!

“The Wind Roars” proclaimed the blog on Day 10!  The volunteers joked that they would be able to sleep in.  However everyone was still up by 7am for breakfast. It was a day for inside work – with the decaying ends of floor joists in Quarters No 2 needing attention plus there was time to complete the interior paint work in the sunroom at Quarters No 3.  Round the morning tea table, discussions centred around plans to continue the restoration effort at the next working bee in November.

Food, as usual, was uppermost in the volunteers’ minds, but supplies were running low.  Ryan and Stefan baked another couple of loaves, and Rachel devised magnificent meals utilising left-overs.  Meanwhile, Dave and Greg ventured outside to complete the external trim on the sunroom and reinforced one of the windows which was flexing in the wind gusts.

The dates of the working bee, so late in April, had been timed to coincide with Easter.  This brought with it the inherent danger of early wintry weather.

Mike, our bricklayer and poet, summed it up …

The winter time is not so good

The wind it blows more than it should
It seems to howl both night and day
It’s telling us to “Go Away”
With long dark nights
Our memories roam
This is the time to think of home.
But now the sun is shining
The wildflowers are on show
We pack our bags, and tools and things
It’s time for us to go.

Sunday – the 11th day of the 10-day working bee.  Maybe, tomorrow, the weather might improve.  A celebration meal at Hooter’s Tasman Island Restaurant featured Rachel’s potato and veggie bake followed by Ryan’s chocolate cake with custard and yoghurt – so good that he licked the bowl clean! 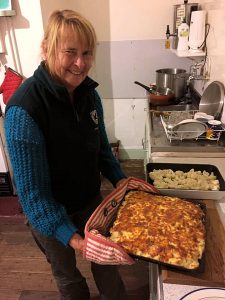 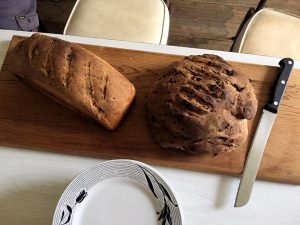 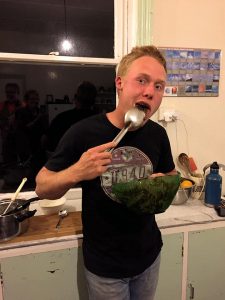 Finally the wind subsided and next morning the sound of a helicopter approaching from the west had volunteers scurrying to get ready to leave.  They were on their way home – ’till next time!

Thank you to everyone who contributed to making the working bee a reality – Parks & Wildlife staff Pip Gowen, Richard Dakin, Luke Gadd, Peter Rigozzi and Mike Copping for their help in preparations and logistics; and the pilots from Osborne Aviation who got the team on and off the island safely.  Costs for the working bee were greatly assisted by a grant towards transport from Wildcare Inc; and PWS who contributed towards material costs.  Particular thanks must also go to FoTI volunteers Rachel Chesmer who managed to keep everyone well fed and Dave Davenport(Paradigm Constructions) who is so passionate about the restoration of the heritage of Tasman Island.  Thanks also to Jo Castillo for off-island organisation and overseeing the weeding programme and Ian Ross the on-island organiser and daily blogger.

Friends of Tasman Island volunteers can be justifiable proud of what they have achieved over the past 14 years.   A big thank you everyone for a very successful 30th working bee. 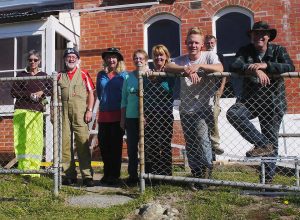 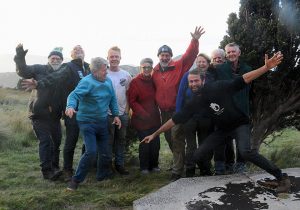