A Wildcare grant of $1846 was received by the Friends of Mount Field in June 2015 for laying out and pinning of approximately 700 sqm of shadecloth on an alpine area to be revegetated. This area is at the Mt Mawson ski tow in Mount Field National Park, which had undergone earthworks some two years previously. The area had been sown with some success and covered in a loose hessian. Naturally growth is slow at this 1200m altitude and animal grazing was also taking a toll on the herbs and grasses.

Alpine revegetation experts have reviewed the area and recommended covering with 70% shadecloth, which assists with regeneration success in alpine areas. This stemmed from a study in the Australian alps starting in 2003 and can be found at this link and is titled “Post-fire experimental trials of vegetation restoration techniques in the peatlands of Namadgi (ACT) and Kosciuszko National Parks (NSW), Australia” published in the ANU journal series Terra Australis.

Before the cloth could be put down winter snow had arrived and then two subsequent attempts were thwarted by the weather; one from gale force winds and the other because Parks staff were required to tackle the bushfire emergency.   Finally, everything aligned and the work was able to go ahead. On a warming day we managed to lay in all and finished up by early afternoon. Even as we left Mount Mawson the conditions were quite pleasant but it was quite a contrast on arriving down at the visitor centre where it felt quite hot. The temperature in the upper Derwent Valley reached 34 but it had been far cooler up top. 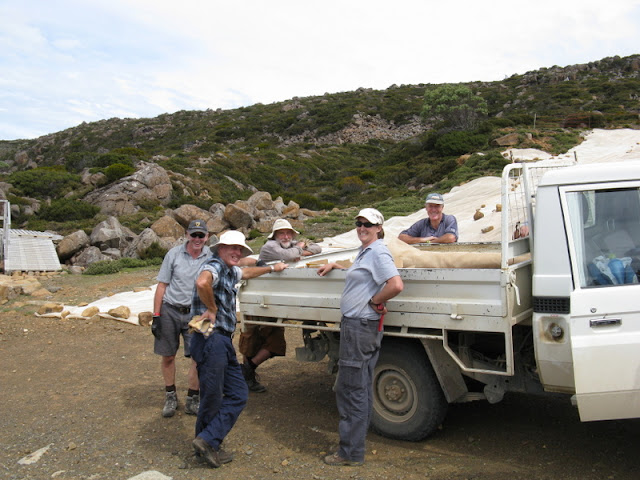 Some of the crew Trevor, Greg, Adrian, Lynda and Peter