Freycinet in October
The main intention in this, our third major workbee for the year, was to complete the volunteers tentsite. This comprises a very large deck built over an old concrete tank stand and extended out with posts concreted in and bearers with treated decking, and a privacy tea tree fence. 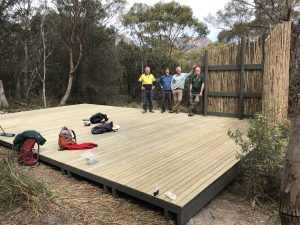 It was a massive job but with the work done last time and with the bearers done by PWS since, it was achievable. There was nothing tentative about the way we went about completing the task. The deck alone took 3,000 nails, there were 2 trips to the Wallaroo landscape supplies complex to cut and trim the tea tree, each one attached with 6 screws. How many was that? I did not count. One participant ruined a new leather nailbag. Was that a job for the Tentafield Saddler?  The site will be home to a large 2 room tent and is intended to house volunteers prior to embarkation on the boat to Schouten Island and Cooks beach for the summer caretaking season. 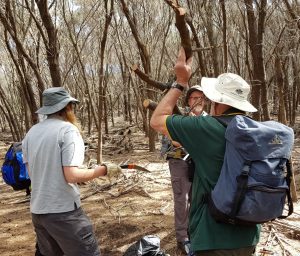 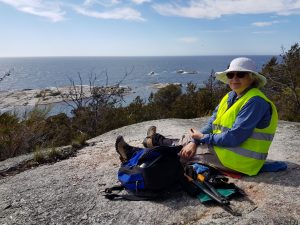 But it was not all about tents. Our F.o.F. tentacles were everywhere. A team spent one day trimming vegetation from the Hazards Beach track, (try it out, the track has been substantially renovated after storm damage), we spent the major part of 2 days removing boneseed, sweet pittosporum (some of this required a chain saw) and agapanthus from the Whalers Lookout reserve at Bicheno, and we did a run thru’ of the Spanish heath site at the northern end of the Park.

Oh, we did a little bit of painting as well.

As usual we all had a great time. We thank (are thanks enough?) Adrian and Cathy Sullivan for the use of their holiday home for the week, and of course Ranger Fiona Everts who was our tenter, (look it up), and who first realised that old site had latent potential.
The team; Sally and Michael Simco, Lorraine Cotter, Adrian Sullivan, Greg Kidd, Nigel Ricketts and Dave Harris.

At the completion of the job PWS staff and volunteers joined together on the deck and celebrated with some liquid refreshment and christened it ‘The Good Intent’.  I am sure it was a portent as while we were there a sea eagle (featured on the Freycinet Park logo) circled us several times, keeping very low, Wow!