Ragwort (Senecio jacobaea) is an agricultural (and environmental) weed that is having an impact on Deal Island. Once firmly established, it dominates an area to the exclusion of other plants.

Ragwort has been known about on the Island since 1998 …. most likely linked to past agricultural activities on the island by lighthouse keepers. There has been work undertaken to reduce the infestation since then with efforts concentrating on one larger infestation over most of the  last 20 years. However in the last 5 -10 years other smaller infestations have taken hold despite the introduction of two biocontrol agents, both of which have failed to establish significant populations on the island.

Much of the remaining grasslands now have ragwort present.

Friends of Deal Island, are running out of physical control options other than the reintroduction of ragwort biocontrols. Given that much of the original ragwort has been controlled on mainland Tasmania the Friends are keen to find out if there are any pockets of the state when the beetle, and or moths, are still in reasonable numbers to collect for relocation to Deal Island. They are seeking assistance from anyone still working with ragwort Control. 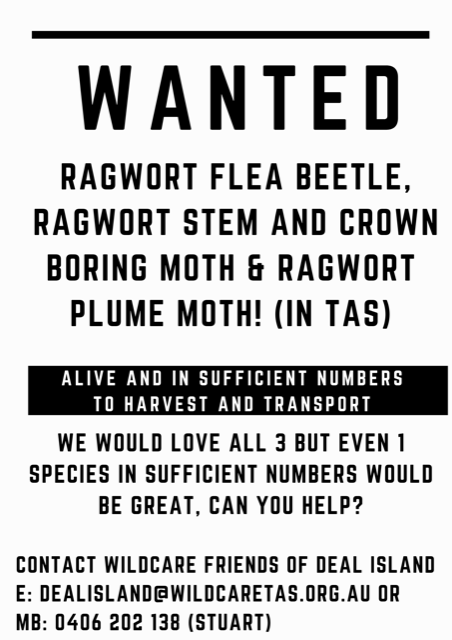